Born in 1975 and raised in Quimper, Brittany, Nathalie Chikhi lives and works in Orlando, Florida. She earned her Bachelor in Visual Communication from Le Paraclet, Quimper in 1996 and a degree in Interactive Multimedia from Les Gobelins, Paris in 1999. She has shown at many venues across the USA since 2006, including the Bakehouse Art Complex in Miami (2008), The MassMoca in North Adams, MA (2011), the Museum for Women Artists in Deland, FL (2011), UCF art gallery in Orlando (2012) and FSU gallery of Fine Art in Tallahassee (2012). She held her first solo show at Twelve 21, Orlando in Sept 2011. Her works ‘Homage to Donald Judd”, sculpture and painting were exhibited at Aqua during Art Basel Miami Beach, 2011. One of her painting, OPAD #1, was selected for the Nurture Art Annual Benefit 2012, in Brooklyn NY. From March 2 to April 20, 2013, she had a solo exhibition, titled “HUE” at Alt Space Gallery, with the Atlantic Center for the Arts, New Smyrna Beach, FL. During summer 2013, she launched a necklaces collection called STIXELS. Last April-May 2014, she did a site specific installation at ArtFields, Lake City SC. She will have a group exhibition in Tampa, in Oct-September 2014 and a mobile installation in March 2015 with the Maitland Art Center.


Warning: sizeof(): Parameter must be an array or an object that implements Countable in /home/customer/www/goodappleart.com/public_html/wp-content/themes/legenda/woocommerce/single-product/meta.php on line 19 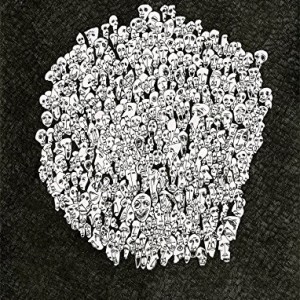 Passing the Veil of Remembrance 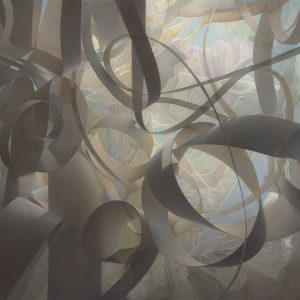 A Move to Joy 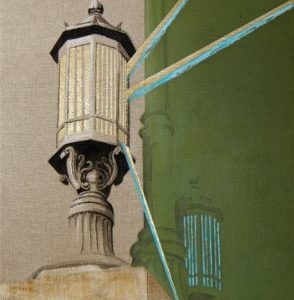 Light on the Seventh Street Viaduct 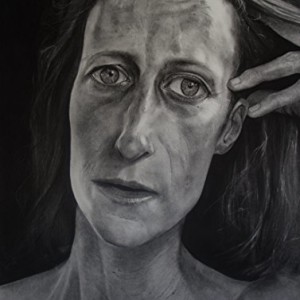 Subject M. releases the associated negative belief system holding her wounds and pain in place, letting it dissolve and feeling the clarity of the moment. Personality-level understanding is achieved, spurred by awareness of the past life's pain which has been repeated in many incarnations. Ignited by knowledge, M. lets go of the karma in the moment and sees into a future without the habitual emotional pitfalls. Her lips are ajar, expectant as a lover's in anticipation of a kiss. Her eyes are far-reaching, projecting into the Divine. Attention is given to rendering the eyes and the lips in an effort to capture the viewer. The faces morphs and oozes out of the surface. Just as one longs for release and clarity, so the portrait comes off the page, leaning into the viewer, moving outward and toward the infinite. The eyes and lips spill out, exacerbating the feeling of yearning. A high level of detail and rendering is accomplished using the best quality charcoal and high grade watercolor paper by Arches. The paper allows for ultra fine texturing and high fidelity in the rendition of skin, hair, and light. Clarity is unmounted and will require a frame in order to hang. 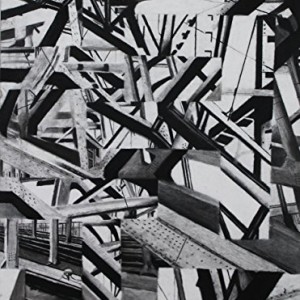 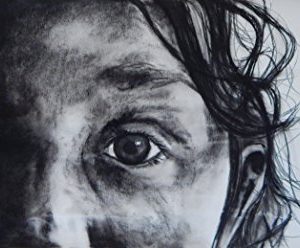 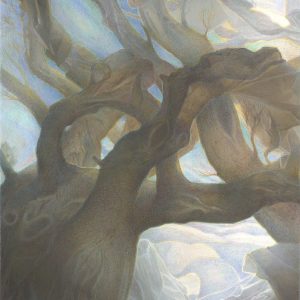 Meticulously detailed drawing on archival paper. This is a color and image study for a larger piece that sold, entitled "Under the Shadow of Mortality". This title is the closest description for the feeling and atmosphere of the image. Not being a large piece, it can safely be shipped loosely rolled in a tube. This will cost a lot less than a framed piece.
$ (as of June 5, 2017, 11:38 pm)1,150.00 (as of June 5, 2017, 11:38 pm) 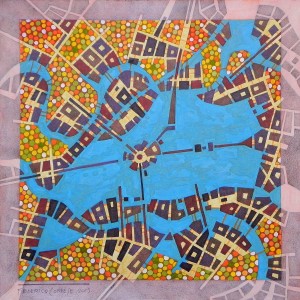 From the series "Code", oil and graphite pencil on paper, 30 x 30 cm. A map is an imprint, a sign of man in the landscape. An alien intelligence, observing our cities from the great distances of the space, could interpret them as the characters of an alphabet, sort of messages, a code of signs, each one different from the other, each with its own meaning and its own syntax. This hypothetical alien presence may not even realize that these cities have a purpose and a function, which are the product of the way we have adapted to live on this planet, but it could engage in an attempt to interpret this unknown language, identifying the alphabet and associating to each character a precise meaning. We will still be able to understand and share this new meanings, or will they have lost any sense for us? 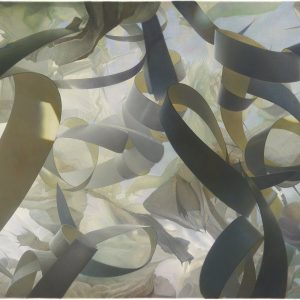 A meticulously detailed composition showing swirling bands of color and suggestions of thorns in the foreground, with complex organic forms being visible beyond these shapes, creating a depth of perspective. The symbolism being the trials and tribulations of the human condition, and the strength we display in over coming them.
$ (as of June 5, 2017, 11:38 pm)6,600.00 (as of June 5, 2017, 11:38 pm) 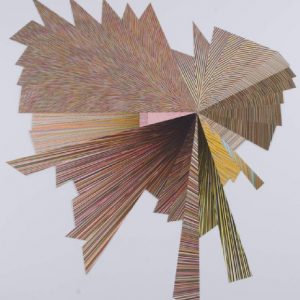 An exercise in focus and precision, Zecca creates his origami-like Collage Radii by combining fragments of his drawings, which repeat sequences of steadied, handmade ink lines that radiate from a fixed point. These collage works can mounted on museum mat board and hung as a sculptural piece or laid flat and framed behind Plexiglas.
$ (as of June 5, 2017, 8:39 pm)4,500.00 (as of June 5, 2017, 8:39 pm)