Love has been one of the most important subjects of the arts for centuries. Some of the most moving plays, songs and paintings have been about or been inspired by desire, attraction, passion, selflessness, loss and despair, all of which can be attributed to falling in love. Some of these works have lasted longer than the love that inspired them, as if an immortal reminder that while love may change or be denied, the ones that truly move will leave a trace to be felt by others. Below are some of the works of art that have stood the test of time and the great stories of passion behind them.

“When I love a woman, that tears everything apart especially, my painting.” – Pablo Picasso

Le Reve or The Dream has recently been one of Picasso’s most talked about works. First, because it sold to Casino Mogul Steve Wynn for $122 million dollars, and second because not long after Wynn bought it, he accidentally tore a hole through the canvas with his elbow. However, the painting which Picasso allegedly painted in just one day, has been the subject of fascination for many years.  This is because Le Reve is one of the most sensuous portrayals of Picasso’s true love and most enduring muse, Marie-Therese Walter.

While it hasn’t always been considered the most important period of Picasso’s career, the late 1920’s to late 30’s was witness to how Pablo Picasso’s work changed the day he met Marie-Therese Walter. 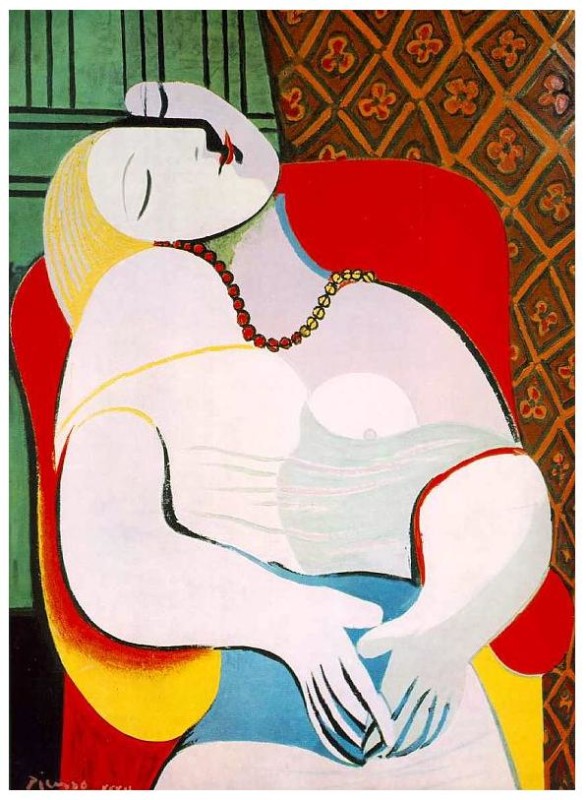 She was 17 and he was 45 when they met at a Paris department store. “You have an interesting face” the artist said to her, “I am Picasso.”  To the young woman with a distinct profile and coy smile, this meant nothing as she did not know of the Artist at the time. However, Marie-Therese was still seduced by a charismatic Picasso who was then married to Russian ballerina Olga. Despite the artist’s marriage, a secret affair between Picasso and Marie-Therese began.

As the affair progressed Picasso started including clues of Marie-Therese in his work.  First in codes so his rightfully jealous wife wouldn’t suspect anything, but soon he put her likeness in everything he created. “When I love a woman, that tears everything apart especially my painting.” He said.

The two would never marry but during the course of their relationship Marie-Therese bore a daughter, Maya. Two months after Maya’s birth, Picasso, infamous for his many women, took on another mistress. Marie-Therese and Picasso’s affair may have ended but the gentle, submissive Marie-Therese continued to love Picasso until her dying day and the artist continued to be inspired by her. His depiction of her nose, her eyes, her hair and purplish skin were often seen drawn or painted, or even sculpted into marble and wood for over 3 decades.

Picasso died in in 1973 and 4 years later Marie-Therese took her own life. She was 68 years old.

La Fornarina has been shrouded in much controversy and clues about it continue to surface. Who was she? The sensual, beguiling, loving look of an intimately posed woman holding her left breast — is this a look directed at a lover, a friend or a potential husband?

Of the many stories surrounding this painting, one of them has the makings of a novella.

As a young man, Raphael was easy-going, possessed great looks and, according to 16th Century writer Giorgio Vassari, very much sought after by women in that period. He began a promising painting practice with the help of Cardinal Bernardo, one of his more influential patrons. It was said that Cardinal Bernardo wanted to marry off his niece, Maria Bibbiena to Raphael. This joining would be advantageous for the young painter.  He’d have a position in court and a patron would continuously support his art. However, Raphael had already fallen in love with a young woman named Margherita Luti, often called the little baker (La Fornarina). It was believed that the two had a secret affair while Raphael was engaged to Maria Bibbiena, and so he delayed the date of their wedding several times.

Maria Bibbiena never became Raphael’s wife as the painter died at the young age of 37. Margherita, the young woman depicted in the painting, resigned herself to a convent and not much was heard of her after that.

Now, this story could stand on its own and it has for a lot of analysts, but recent extensive x-ray analysis of the painting revealed that on the left ring finger of La Fornarina, is a square cut ruby and gold ring. Experts say that such a ring is unusual for a young single woman and this perhaps provides us with more information on the significance of the relationship between the two. One can also see a band on La Fornarina’s left arm bearing the artist’s name, leading to the possible conclusion that Raphael may have been engaged to two women at the same time.

Rodin picked a moment in the story where a deeply disturbing tragedy was about to occur.

This Valentine’s Day edition of the blog wouldn’t be complete without one of the most popular allusions to romance, Auguste Rodin’s The Kiss. Looking at this sculpture it is easy to think that this is about the pure love between two people, after all both seem to be completely enraptured with one another. However this sculpture is Rodin’s depiction of the story of Francesca and Paolo, the two adulterous characters in Dante’s Divine Comedy.

Francesca da Polenta and Paolo Malatesta were from two rival families in Italy. Francesca was married off to Paolo’s crippled brother Giovanni as a means to solidify a truce between the families, while Paolo was married to Countess Orabile Beatrice. Despite their own marital commitments Francesca and Paolo carried on a 10 year affair. The sculpture shows us the pair on the verge of a passionate tryst, their bodies in different stages of submission. A walk around the sculpture reveals Paolo’s hand holding a book.

Rodin picked a moment in the story where a deeply disturbing tragedy was about to occur. Francesca and Paolo are sitting together in her bedroom. He is reading to her the story of Sir Lancelot and Guinevere, when Francesca, deeply enamored by Paolo, decides to throw herself at him. In the midst of this sweeping passion, there is a loud knock at the door. It is Francesca’s husband Giovanni who is determined to interrupt their affair and face down the lovers.  When Francesca opens the door Giovanni sees Paolo on the verge of escape. Giovanni, deep in anger, kills his brother first and his wife next.

In Dante’s novel we find Francesca and Paolo in the second circle of hell, the part of damnation reserved for the lustful. There they are destined to be forever trapped in an eternal sweeping whirlwind and storm as they allowed themselves to be completely swept up by their passions.